Home > Supplements Overview > Why is Glucosamine the Most Popular Joint Supplement?

Why is Glucosamine the Most Popular Joint Supplement? 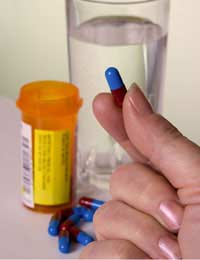 Glucosamine is a well-known and widely bought nutritional or health supplement. Made from glucose and an amino acid called glutamine, it's a compound found in the human body that produces glycosaminoglycan, a molecule that helps repair cartilage and other tissues.

Unfortunately, production of glucosamine in the body tends to slow down as we get older, which can impact our joints. That's why some people choose to buy it in supplement form, believing it can help with joint pain and other problems such as osteoarthritis, or OA, which is usually age-related and caused by wear and tear on the joints. As such, it has become arguably the most popular health supplement for joints on the market today.

People who suffer from osteoarthritis have deterioration of the cartilage which cushions the joints, causing joint pain. It's believed that glucosamine joint supplements may help prevent the joints from further deterioration, and also repair joints and help produce more of the fluid that lubricates them.

Interestingly, it also helps the skin, and people who take supplements of glucosamine before operations have had better luck with the healing of surgical incisions. In some studies it has also shown helpful in treating IBS (Inflammatory Bowel Disease) and Crohn's Disease, although this has not yet been fully proven.

Glucosamine supplements that are available in many health food stores are manufactured from chitin, which is found in many shellfish such as lobsters, crab and shrimp, as well as in other sea creatures. They are usually available in a few different forms commonly referred to as salts. Sometimes they are called chitomine, or Glucosamine Sulphate.

Glucosamine is also used in some cosmetics and sports drinks. However, to treat joint problems, it is commonly combined with another glycosaminoglycan called chondroitin, produced from articular cartilage, which is thought to help joint resiliency.

Who Should Not Use Glucosamine?

Glucosamine has several mild side effects, although most people on the whole tend to tolerate it well. Side effects can include headache, drowsiness and an upset tummy. People who have any allergy to shellfish should avoid glucosamine unless it is proven to come from a different source. The supplement can also worsen bleeding in people with bleeding disorders and be dangerous if mixed with other supplements or prescribed medications. Ask you doctor before taking it, or indeed any dietary supplement. Its effect on pregnant or breastfeeding women is unknown.

Many studies have been done on glucosamine, which points to a positive effect. While it is not on prescription, a month's supply to help with arthritis costs about £10 a month, but your GP can reimburse this cost as the Prescription Prescribing Authority will reimburse them. So in effect, you can get it for free.

Be aware that is glucosamine is still classified as a supplement rather than a drug, its manufacture does not have to undergo the same rigorous testing that drugs do. Only buy glucosamine supplements from well-known outlets and reputable suppliers. It is not advised to buy it on the Internet as it may come from outside the EU and have different quality control standards.

Some studies have shown that taking glucosamine can have a positive effect on osteoarthritis, often combined with other health supplements, although it works less well with people who suffer from heightened levels of pain. It might be worth asking your doctor about this popular supplement if you think it could help you, too.