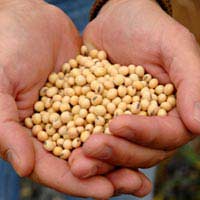 One reason people in countries such as Japan enjoy a relatively low incidence of heart disease could be because their diet is rich in soy, according to many dieticians and scientists who have studied the effects of foods high in saturated fats on cardiovascular health.

Soy protein, found in foods such as tofu and soy milk, has been found in some studies to help lower the level of cholesterol in the blood overall, including low-density lipid cholesterol, or “bad” cholesterol, as well as triglycerides.

It also, according to some studies, raises high-density lipid cholesterol, or the “good” cholesterol you body needs. When that happens, the cholesterol no longer clogs your arteries, and your heart health is better.

Does it Really Work?

While it all sounds too good to be true, it might be. There has been some controversy surrounding the studies, and some people believe that more conclusive evidence is needed. Two studies in particular cast doubt on positive findings about soy protein:

There is no doubt that replacing foods in your regular diet that are high in cholesterol as well as saturated and trans-saturated fats with low-cholesterol soy foods such as tofu or soy milk can help your heart health. Any switch from a fatty diet to a healthier one can only do your health good.

But whether it’s because you are regularly ingesting soy protein on the new diet, or because you are no longer eating a double-cheeseburger and fries for lunch every day, still remains to be seen!

Here are some ways to get soy into your diet – no matter what the studies say, if you eat a tofu burger daily instead of a Big Mac, you’ll be healthier...

It’s unclear how soy protein can be of help when it comes to lowering cholesterol and heart health, but as a replacement for high-fat foods, it’s definitely worth eating. Why wait until studies on soy protein are conclusive – start adding soy to your diet today for better health.
Next Page

Do Fertility Herbs and Supplements Help?