Home > Supplements for Men > Protecting Your Prostate With Boron

Protecting Your Prostate With Boron 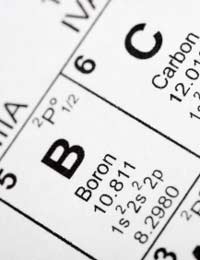 Boron is a trace element, found in certain fruits, vegetables and alcoholic drinks, which helps set up and maintain natural hormone levels in the body. In the last few years, it has also been touted as a possible new way to protect from prostate cancer.

The breakthrough U.S. study took place with a group of roughly 8,000 men. Those who consumed 1.8 milligrams of boron had less than half the risk of prostate cancer than those who had half that amount.

Another study, this time in mice, showed that supplements of boron were instrumental in shrinking tumours in the prostate by up to 39 percent. (The prostate forms part of the male reproductive system, and is a tiny gland located below the bladder and in front of the bowel.)

The reason for this is because boron has a supposed effect on levels of testosterone, which helps protect against prostate cancer. Some studies have shown that taking dietary supplements of boron may also help preserve bone mass in women who have already experienced the menopause.

Boron is a mineral which we get from lots of different sources in the food we normally eat. Nutritionists are now saying that healthy adults should ideally consume between one and three milligrams daily.

Here are some of the foods we eat that contain boron; the level of boron contained within them will depend on the soil in which they are grown. They are:

Although boron is found most commonly in bones and dental enamel, boron is present in other parts of the body as well. It is also commonly used for treating symptoms of osteoarthritis and helping older people to think more clearly and correct a loss of coordination.

Interestingly, a derivative of boron, boric acid, is also commonly used to treat vaginal yeast infections, and it is also sometimes used as an eye wash or astringent. And another study found that boron was instrumental in raising the level of sex hormones in both men and women past the normal age of female menopause.

A Word of Warning

Boron in larger amounts than those recommended above is known to be toxic. Signs of boron toxicity can include peeling skin, tremors, irritability, diarrhoea, vomiting, weakness and headache.

As boron is thought to also increase the level of oestrogen found in the body, people who have oestrogen-sensitive conditions such as breast cancer should avoid taking any dietary supplements of this mineral.

It is also not recommended for people with kidney problems, as the kidney will find it difficult to flush boron out from the system.

Finally, there can be interactions with other supplements or prescribed medications you might be taking, so ask your GP before taking boron, or indeed any supplement of any kind.

Boron is known to play a role in healthy functioning of bones and joints, most likely due to the fact that it helps our bodies to balance and absorb certain vital nutrients, such as calcium and magnesium.

Because of its link to bones and joints, there is strong evidence that it can help deal with problems such as osteoarthritis and osteoporosis. There is also some evidence that it may help prevent prostate cancer, but although initial studies are promising, so far that has not been conclusively proven.